Another $500 Million Down the Tube?

Five years ago, when the earthquake struck Haiti killing over 200,000, I donated a significant sum to the Red Cross. I was not alone. Millions of people were touched by the plight of a people violently stripped of their homes in  matter of seconds. Half a billion dollars was raised by the Red Cross to rebuild Haiti. 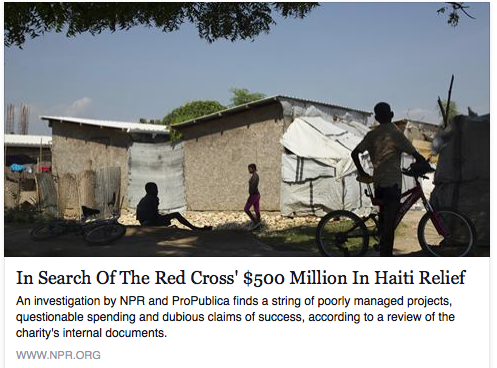 Alas, the Red Cross, skilled in relief management, had never managed reconstruction before. Sadly the results were similar to the 10 billion dollars in relief aid that never reached the people in direst need. Thousands of people are still living in desperate conditions years after the earthquake.

NPR and ProPublica have been following the money trail, and share the saga of poor money management, thoughtless spending and unfounded claims of successful projects.

The Red Cross brochures claim they rebuilt the neighborhood of Campeche, much to the surprise of the residents. None of the work promised by the Red Cross in a 2012 booklet has been done. No homes, clinics, water or bathrooms. The project cost $24 million.

According to Meltzer, the Red Cross attorney, restoring shelter has been  a top priority. He said that the Red Cross has been instrumental in bringing housing to over 130,000 Haitians. Unfortunately, that number is grossly exaggerated.

After extensive correspondence with NPR and ProPublica by email, the Red Cross has finally admitted that the number of 130,000 Haitians is actually comprised of several groups it assisted in some way. Some had attended a seminar on fixing their homes, some had received temporary housing, some had received temporary rental aid. Temporary housing tends to self destruct after a short period of time, leaving the people in the same situation they were in before.

While there has been gross mismanagement of so many international projects to rebuild Haiti, there are organizations that are making a difference in Haiti. Some of the most successful are staffed and managed in large part by Haitians. For example, Global Communities and PCI have built more than 300 multifamily homes in the Ravine Pintade neighborhood. These home are complete with bathrooms and kitchens.

I don’t know about you, but I am angry and outraged at the incompetency and mismanagement that has plagued the relief efforts to rebuild Haiti. It’s not rocket science to build houses. Simple tin roof houses of concrete with 3 or 4 rooms can be built for under $5,000.00 using local materials and local labor.

I’m working closely with my longtime friend, Gladys Thomas, to build homes for earthquake survivors and I hope you will join me in this project. Gladys, founder of the Foundation for the Children of Haiti, is building a technical school near the site of the future Haiti Housing Project homes. She has a great track record, having successfully built schools, outreach programs and one of the best hospitals in Port-au-Prince.

Join us today to make a difference and be the change. It’s a big project and we need help to make it a reality.

Are you interested in being part of the Haiti Housing Project? Want to learn more?

Send me a message through the “Contact Us” / “Let’s Talk” app on the bottom of this page.

Be The Change You Want to See!

You have the power to change the world. Don’t take my word for it… Think about it! How many political changes, social transformations, or inventions have occurred because someone boldly stepped forward and initiated them?

Where would India be if Gandhi had played safe and small? What  if Martin Luther King had kept his dream to himself, would the United States still be segregated? What kind of technology would we have if Steve Jobs had not taken computers seriously?

I’m not saying you need to play big to change the world… the simple act of choosing love and peace over anger and recrimination sends ripples of love out into the universe! You know what feels right! If you see an act of injustice, you can do something about it. Be the change you want to see!

Recently I watched an episode of VICE, an investigative reporting series on HBO, exposing the blatant misuse of TEN BILLION DOLLARS in aid funding to Haiti. It was supposed to provide housing and a better lifestyle for the thousands of earthquake victims. Instead, it’s five years after the earthquake, yet only one cent per dollar went to the people. Chemonics, one of the “for profit” companies contracted for the relief project, built an $18,000,000 soccer stadium and multimillion dollar cultural center in the norther town of Coracol, that was not affected by the earthquake, and provided no aid for the inhabitants. Thousands of people are still living under plastic sheeting in unsanitary conditions, yet a multimillion dollar gated housing community was built for the US Aid workers.

I was outraged. You see, I lived in Haiti for seventeen years, and I care very much about the Haitian people. I know that clean, simple cement block housing can be built for under $5,000.00 for a three or four room house, with a tin roof. I decided to do something about it. I reached out to my friend Gladys Thomas, founder of The Foundation for the Children of Haiti. I shared my vision with her and we are collaborating on the Haiti Housing Project. Gladys is a woman who knows how to get things done. She has built an orphanage, schools, outreach programs, and one of the finest hospitals in Port-au-Prince.

Would you like to make a difference and be part of the Haiti Housing Project?

If you would like to learn more, or are interested in being part of this exciting project, in any capacity, let me know by sending me a message through the “Contact Us” / “Let’s Talk” app on the bottom of this page. 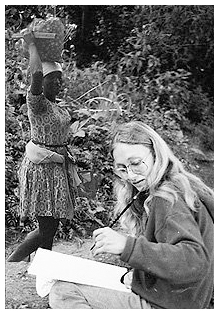 I’ve had a love affair with Haiti for decades. I lived there for 17 years as a painter and graphic artist. My own spiritual awakening was birthed in Haiti! And the people, with their rich cultural heritage were inspirations for my artistic adventures.

My close, energetic connection with this island nation guided me at 5 pm on January 12, 2010, to turn on the TV, ( I, who NEVER watches the news),  as horrific images of the earthquake’s devastation unfolded before my eyes.

Fast forward to April 2015, when the  HBO investigative reporting series VICE, exposes the blatant misuse of the $10 billion of aid earmarked for housing the earthquake victims. I am outraged to learn that only one cent of every dollar reached the people. The investigative reporter discovers that ninety three million dollars built only 2,600 homes. Much of the money from Chemonics, a for profit company, was directed to build a world class $18,000,000 soccer stadium and multi million dollar cultural center, but no housing or other improvements in Coracol, a village in the north, not affected by the earthquake. Millions of dollars were spent building beautiful homes in a gated community for US AID employees, but almost no housing for the people who needed it. 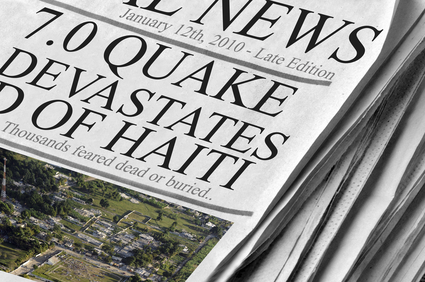 Image is in the US public domain and taken by U.S. Coast Guard photo by Petty Officer 2nd Class Sondra-Kay Kneen.

As I move into my beautiful new home, the thought of thousands of gentle Haitians still living on the streets under plastic sheeting, without plumbing, easy access to clean water, or hope is too much to bear. I know that clean, sturdy housing can be provided for families at a very low cost – under $5000.00 for a three or four room cement block house with a porch and a tin roof. With my intimate knowledge of Haiti, I know who can get the job done efficiently.

I Skype Gladys, a trusted friend who heads an organization for Haitian children she founded thirty years ago. She’s excited! Together we are working creating a project to build houses in the South of Haiti for those affected by the earthquake.  The project we envision will have oversight.  The housing recipients will meet certain qualifying criteria. They will enroll in the technical school Gladys is building, so that they will gain literacy, learn simple administrative skills, and gain the tools to run a business. They will actively participate in building their home. It feels good!

Would you like to make a difference and be part of the Haiti Housing Project? I’m currently forming a committee to get the ball rolling!  If you would like to learn more, or are interested in being part of this exciting project, in any capacity, let me know by sending me a message through the “Contact Us” / “Let’s Talk” app on the bottom of this page.