My focus this week is on forgiveness.  My special guest tonight on Joy Strategies radio, 6 time EMMY award winner, Shawne Duperon, is producing a movie called “Project Forgive”,(www.projectforgive.com) inspired by her friend Gary Weinstein, who found peace through forgiving the drunken driver who killed his wife and two sons, his whole family.  In fact, Gary Weinstein has reached out to Wellinger, asked to speak to his children, to help them heal.  Stories like Gary’s are inspirational.  They give us hope by showing us another way, a path of grace through the unforgivable.

Gary’s story brought to mind something I read last year about a woman, Mary Johnson, who forgave Oshea Israel, the man who killed her only son.  When you look at their picture, Mary and Oshea could be mother and son, yet he is the man who shot her son, Laramiun Lamont Byrd, multiple times and left him  outside North Memorial Hospital in 1993. 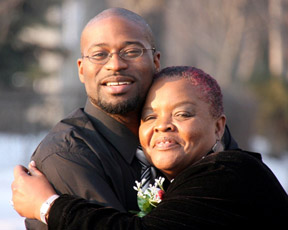 Mary Johnson lived with bitterness and hatred for over ten years said, “He was an animal to me and I felt he was where he needed to be.  He needed to be caged.”

Yet today, Johnson said, “He’s like my son.” They’re now raising funds for a support group Johnson founded called From Death to Life,and are working together to promote healing between families of victims and perpetrators.

This miracle of forgiveness occurred 5 years ago, when Johnson went to visit Israel in prison, because, she said, God nudged her. She said, “That was one of the most profound events of my life.  It was life-changing.”

She said the visit brought her to her knees.  She said, “When I stood up, I began to  feel something in my feet.  And it just began to move all the way up my body and it just went and I knew, I knew that all the anger, all the hatred, all the animosity I had for him, I knew it was over with.  It was gone.”

Johnson and Israel hope to bring other families of violence together for forgiveness.  They also dream of  building a grief center in north Minneapolis.

These stories put our “stuff” into perspective, don’t they?  If people can find peace through forgiving the very people who killed their only children, can’t we find it in our hearts to forgive those who have hurt us or offended us in other ways?  Forgiveness is not about the offender.  It’s a gift for us, a way to create miracles of peace and joy.  We can release the anger, hatred, pain and the bitterness.  Sometimes it takes a little willingness to see things differently, for by releasing the other person, we are releasing ourselves.

Click here to listen to my interview April 1, 2012 with Shawne Duperon on Joy Strategies Radio!